It is no secret the Federal Reserve is near certain to raise the Fed Funds rate at the conclusion of the committee’s March 15-16 meeting. The bond market has been expecting a rate hike for some time and market interest rates have moved higher over the last year and a half partially in anticipation. During the initial move higher in market rates beginning soon after the pandemic led economic shutdown in March 2020, the yield curve began to rise as seen in the top panel in the below chart. Since early 2021 though, the yield curve (10yTreasury yield minus 2y Treasury yield) has been flattening, ie, short term interest rates have been rising faster than long term interest rates. 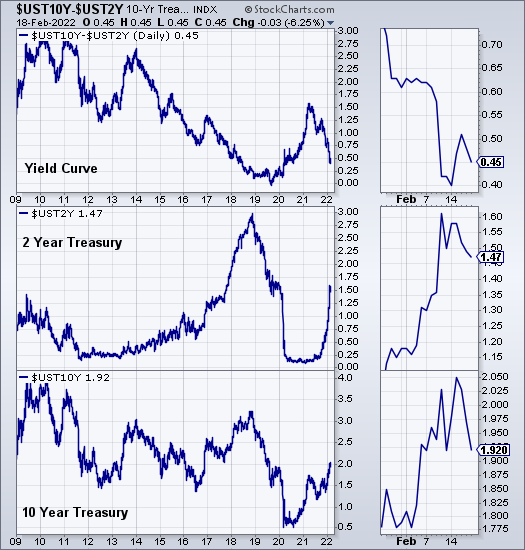 It is common for long term rates to rise as the economy is coming out of a recession. Stronger economic activity can lead to inflationary pressures, and investors are seeing that now. A reason for the Federal Reserve to increase short term interest rates is to slow a potentially overheating economy. With a slowing economy, and likely less of a headwind from inflation, longer term rates tend to stabilize or decline. The balancing act for the Fed is not to push short rates up too quickly that results in the yield curve inverting, ie, short term interest rates rise above long term interest rates. However, history suggests the Fed tends to go too far in its effort to raise rates and slow the economy with the end result the economy falls into a recession. The yellow shading on the below chart represents the times the Fed has increased rates until the time of the last rate increase. The blue line represents the yield curve and it shows in three of the last four rate hike cycles in the past 30 years, the Fed went too far in raising short term interest rates and the economy fell into a recession. 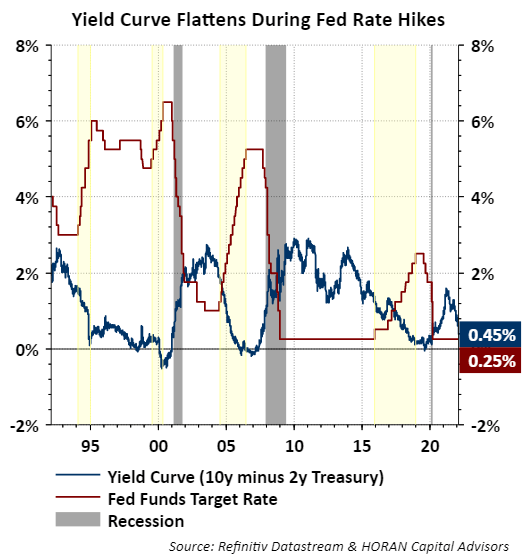 Yield curve data back to 1955 shows in only two times did a recession not follow an inverted yield curve. More on this can be seen in a research paper from the Federal Reserve Bank of San Francisco, Economic Forecasts with the Yield Curve. Highlights from that paper can be read in a post I published in the summer of 2018, Respect The Predictive Power Of An Inverted Yield Curve.

For investors, there are certain stocks / sectors that tend to perform okay in a rising interest rate environment. ProShares has created the Equities for Rising Rates ETF (NASDAQ: EQRR) that has outperformed during this increasing interest rate period as seen below. As a caution though, the ETF’s 50 stocks fall into only five sectors, Financials, Energy, Materials, Industrials and Technology. Also shown on the below chart is the Invesco S&P 500 Pure Value ETF (NYSEARCA: RPV) which has performed nearly in line with EQRR. RPV is more diversified as the holdings fall into all eleven GICS Economic Sectors with Financials, Health Care and Staples being the three largest weightings. 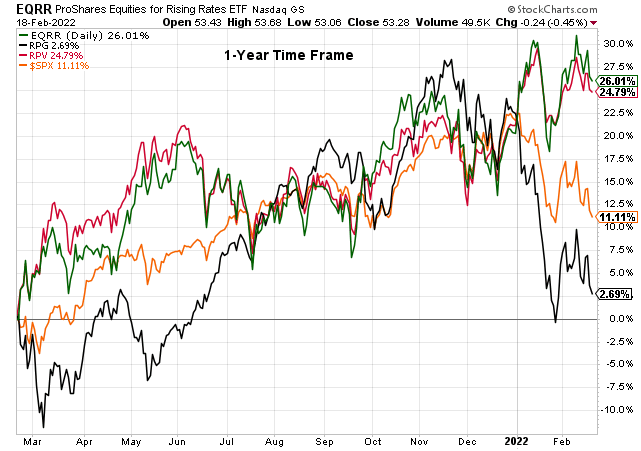