Choking under pressure. Most of us are familiar with this unfortunate phenomenon. The moment you’ve spent so much time preparing for – whether it’s scoring that winning goal or nailing a client pitch – comes, but instead of giving the performance you know you’re capable of, stress and anxiety get the best of you. You can not handle the pressure; you “choke.”

Why does your performance fall apart, even after you’ve practiced to the point of perfection? Cognitive scientist and president of Barnard College Sian Beilock had the same question, so she did the research – or “me-search,” she quips – to figure it out. “I really wanted to know why sometimes I did not perform as well as I thought I should when the pressure was on,” Beilock says. “I was a big athlete growing up, so it was certainly on the athletic field, but also just in testing, I always did much better on my practice SATs than I did during the real thing. And I wanted to understand what happened – what changed when I was so motivated to perform well and, ironically, I just did not put my best foot forward. ”

During her 12-year tenure as a professor of psychology at the University of Chicago, Beilock focused on how children and adults perform at their best, particularly under stress, with an emphasis on the success of women and girls in math and science. She’s also the author of Choke: What The Secrets Of The Brain Reveal About Getting It Right When You Have To (2010) and How the Body Knows Its Mind: The Surprising Power of the Physical Environment to Influence How You Think and Feel (2015). 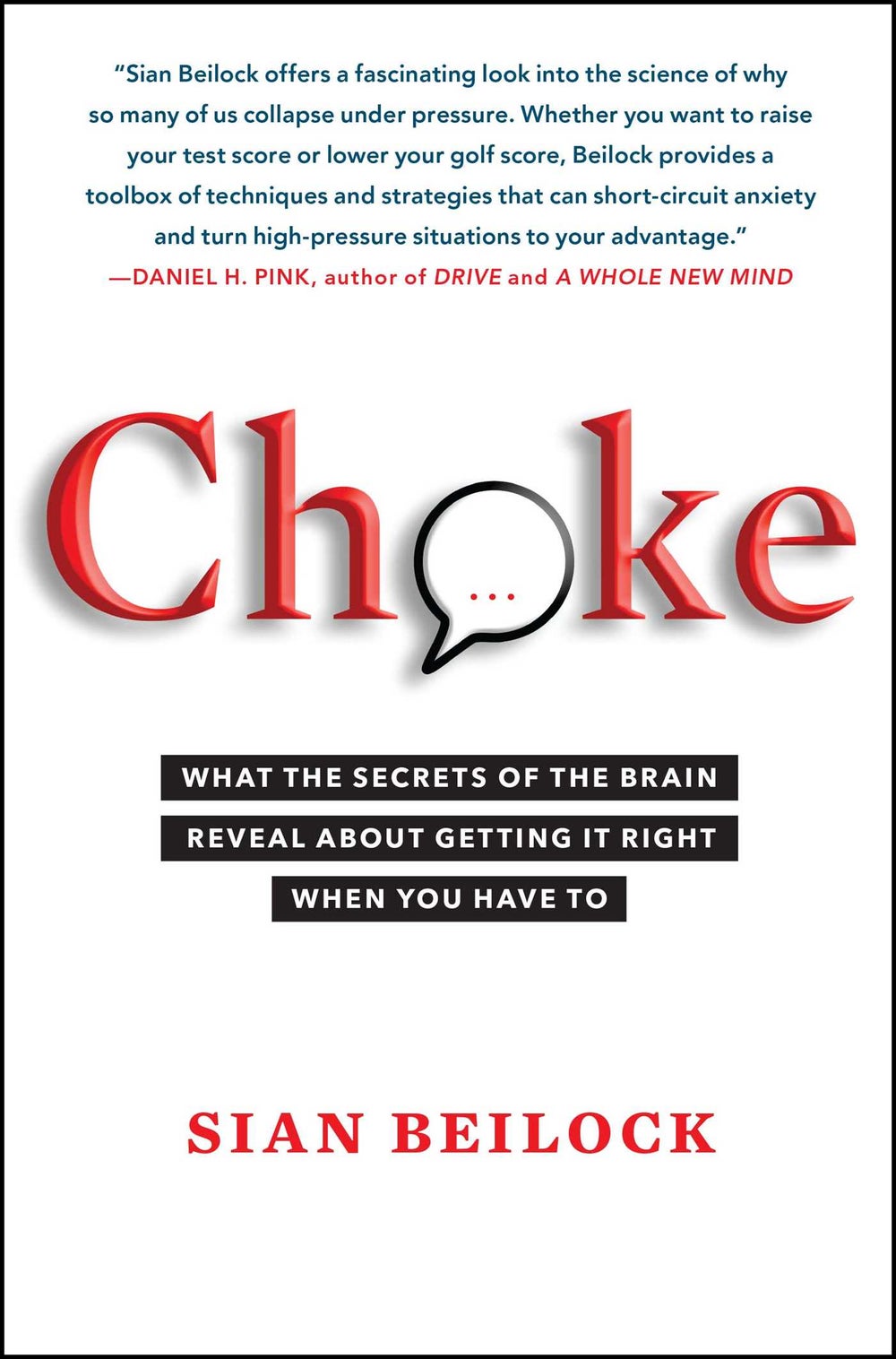 Why do we choke under pressure?

It’s not a coincidence that you do not give your optimal performance when it matters most. According to Beilock, your desire to do well in a high-pressure situation can actually negatively affect the outcome. “Something people do not often think about is that we often get in our own way,” Beilock says. on the athletic field, or doing something we’ve done a lot of times before, we often start monitoring what we’re doing, and we actually disrupt ourselves.

So it’s kind of like when you raise your hand to say something, and then all of a sudden people are watching you, and you’re thinking about every word coming out of your mouth, and then you stutter, ”she continues. “You’re pretty good at talking normally, but now all of a sudden, when you’re monitoring yourself and focusing so much on what you’re doing, it can actually be disruptive.”

Is everyone at equal risk?

According to Beilock, choking under pressure is an “equal opportunity” event. In some cases, the highest-performing people are actually more susceptible to poor performance in high-stakes situations. “The highest-performing people have the most to lose by not performing at their best,” she says. “And oftentimes, the highest performers are the ones who are really putting a lot of pressure on themselves, and they’re sort of expecting perfection and monitoring themselves if they do not have it, and it can lead to worse performance. “

Of course, it’s also worth noting that individuals are subject to different situations and sets of expectations, which can contribute to performance anxiety. “What people tell us, whether it’s parents, teachers, bosses or colleagues actually matters,” Beilock says. “So if there’s an expectation that you should not be so good at what you’re doing or either you have it or you do not, that can actually affect not just how you perform, but how you even practice. If someone has a preconceived notion that you’re never going to be this great at something – like a teacher, boss or parent – it affects that individual’s willingness to want to even try. ”

Additionally, Beilock says these powerful notions are particularly interesting in a gender context, as they can impact representation in certain fields. She cites research that shows that when people chalk success in a given field up to “brilliance,” those fields tend to be male-dominated. “It comes down to expectations,” she says. “Maybe there’s this expectation that women are less likely to just have it right, less likely to have this brilliance, and when people do not expect you to be brilliant, you often do not want to be. And you often probably do not try as hard once you are there. ” Beilock also explores this idea in her TED Talk.

Related: How to Make Pressure Work for You

How to give your best performance when you’re anxious

The pressure we put on ourselves can make it feel like the odds are stacked against us. Luckily, certain strategies can help promote success.

Part of the solution to performance anxiety lies with the body’s response to high-stakes situations, Beilock says. Your sweaty palms or spiked heart rate can feel like a negative response to a stressful situation – but that’s not always the case. According to Beilock, the physiological reaction you interpret as anxiety in a negative context is actually identical to the one you experience when you’re excited about something positive.

Beilock’s done research on the subject, telling student participants sitting for important exams that their sweating palms and fast-beating hearts are actually signs that they’re ready to go, that blood’s being sent to their brains so they can think. “When we have them reframe this sort of physiological response in a positive way, rather than an ‘Oh shit, I’m going to fail’ way, the students actually do better on the test,” Beilock says. “Something so simple can have a big effect, which is exciting because it gives us some sense of control.”

Beilock also says it’s crucial to practice under the right conditions – the same ones under which you’ll perform. “The idea is to practice in a way that helps you get ready for the stressful situation,” Beilock says. “Oftentimes, if you’re pitching to a client or giving a talk or even a toast at a wedding, you look over your material, but you do not have to get up and practice delivering it. We know that if you can mimic what you’re going to experience, you do so much better. So, pitch to a group of friends, or if no one will watch you, do it in the mirror – anything that gets you used to all eyes on you can be really helpful. ”

Related: How to Avoid Burnout in a High-Stress Environment

Additionally, as the big day approaches, it can be helpful to put your thoughts onto paper. “I would say that there’s a real power in sort of downloading your worries, getting them down on paper,” Beilock says. “We know that journaling can be really helpful for reducing stress and reducing some of what’s popping around in your head in the long-term. ” Beilock also recommends practices that help you focus on the moment itself rather than the consequences – mindfulness exercises can be a good place to start. Then, when the time comes to perform, you’ll be less likely to overly monitor yourself and mess up under the pressure.

The good news is that no matter who you are or what you’re doing – or which social pressures might be influencing your outcome – understanding why you falter under pressure and taking steps to prevent it will set you up for success when you need it. most. “Just like anyone can choke, anyone can thrive,” Beilock says.

These Are the Three (3) Most Upgraded Stocks For Q2

Franchise Trends That Make 2022 the Year of Opportunity

Thor Industries (THO) Stock Moves -0.91%: What You Should Know